Last year I wrote about some stories I’d come across that were told in a non-traditional that really worked well. I suppose turnabout is fair play – sometimes the gimmick just gets in the way of the story.

Daytripper is a beautifully put together graphic novel. In each chapter it tells the story of Bras, a writer (first of obituaries, later of novels), as he experiences certain turning point days in his life. It gets a little treacly and really hits you over the head with the “wonder of the everyday” stuff, but some of the individual pieces are good and the art is uniformly excellent. 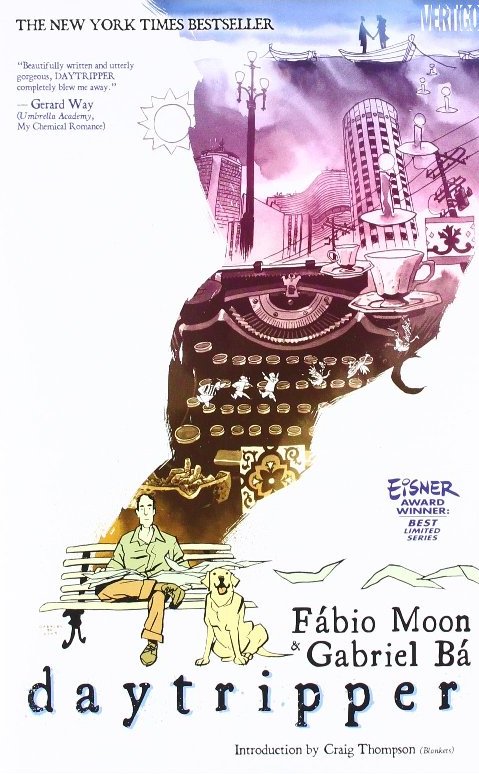 Here’s the thing – at the end of every chapter, at the end of every vignette – Bras dies. Most of the time he does so in sudden, horrible ways, since they happen at all times of his life, from childhood on up. That’s an interesting way to structure a story, provided you do something with it. Creators Fabio Moon and Gabriel Bá don’t, however. There’s no overarching fantastic of magical realist element that gives the repeated deaths meaning. Everything just resets and we get another version of Bras – one blissfully unaware of his prior fates – to live out another last day.

Without that, the gimmick overwhelms the rest of the book. As readers, we know what’s coming at the end of every chapter. It becomes a macabre game, wondering just how Bras is going to snuff it this time, with methods ranging from the mundane (traffic accident) to the ridiculous (murdered by an old friend living in a shack in the desert). Meanwhile, frustration builds as you wonder just what the point of all this, beyond the hammering home of the tired old cliché about living every day as if it’s your last.* This is clearly a minority view when it comes to Daytripper, so take it with a gram of salt.

My point is this. It’s possible to tell perfectly good stories in the traditional, third-person POV, past tense, linear kind of way (at least I hope it is!). It’s also possible to deviate from the expected in order to throw your readers off, make them engage with the story in a different way, or what have you. But the gimmick has to serve something. Making readers struggle through a non-linear story just because you can isn’t clever, it’s just mean. If I, as a reader, am going to have to put together the puzzle pieces, the final picture better be worth it.

* I’ve never understood the wisdom of this. If it was really my last day on Earth, I wouldn’t worry about mundane shit like paying bills or going to work. But if I lived my ongoing life that way I’d quickly be homeless, unemployed, and (I suspect) divorced. Recognizing this isn’t likely to be your last day and you need to plan accordingly is part of being an adult.