For the longest time being and American soccer fan meant, among other things, getting stick from fans of other American sports about what shit soccer is because games can end in draws. Scoreless draws, no less! Sure, the occasional NFL game winds up tied, but nobody likes it, and in every other major sport teams play until there’s a winner. They even changed the rules for college football to provide for endless overtime if needed.

My answer to this has always been about how goals are precious in soccer and, sometimes, a draw is a just result. More than that, a team that battles back to “grab a point” with a late goal is just as exciting as a team scoring a late winner. Sure, there are boring draws in soccer, but there are boring games in every sport.

What I have noticed in soccer, though, is the tendency to treat draws as better results than they are. It makes me grind my teeth every time I hear a manager or player talk about “playing for a draw,” especially in a road game. It’s one thing, for example, to look at a US World Cup qualifier in Costa Rica and say a draw as a good result all things considered; it’s completely different to start the game playing for a single point.

I’ve been thinking about draws in the wake of the final weekend of the English Premier League, which saw Manchester City defend their title over a charging Liverpool. Here’s how the final table shaped up (via the BBC):

I’ve included the top four there just to show how far out in front Man City and Liverpool were. For comparison’s sake, Liverpool’s 97 points would have won the title any other season this century, except for last season (Man City had 100!). It was a two horse race for many months, but Man City was always a nose ahead, for one simple reason – draws.

Much has been made of the fact that Liverpool lost only one game this season and how odd it is for them to come second to Man City, who lost four. How does something like that happen? Well, for one thing, the two teams played twice during the season, with Man City winning once and the other winding up in a draw. That certainly helped Man City’s hopes.

More than that, it’s that Liverpool drew too many games. Sure, Man City lost four, but they only drew twice, whereas Liverpool drew seven times. As a result, Man City won more games than Liverpool, which seems as good a basis as any for determining a champion.

The language of soccer is filled with talk about a team “getting a result” when they draw. And, sure, they get a point for the standings, which is better than nothing. But one point is closer to none than the three points you get for a win,* so it perhaps makes more sense for teams to privilege victories over “results.” I’m reminded of the stat-based theory that NFL teams should go for it more on fourth down. The benefits of pushing for a win (or a first down) are so much higher than what you risk in terms of losing.

Bottom line – the best way of winning a championship in just about any sport is to win as many games as you can. There can be good draws – Liverpool’s late point against Everton was better than nothing – but most of them aren’t. Draws suck. Playing for a draw is bad strategy in the long run. The sooner the soccer world realizes that the better. 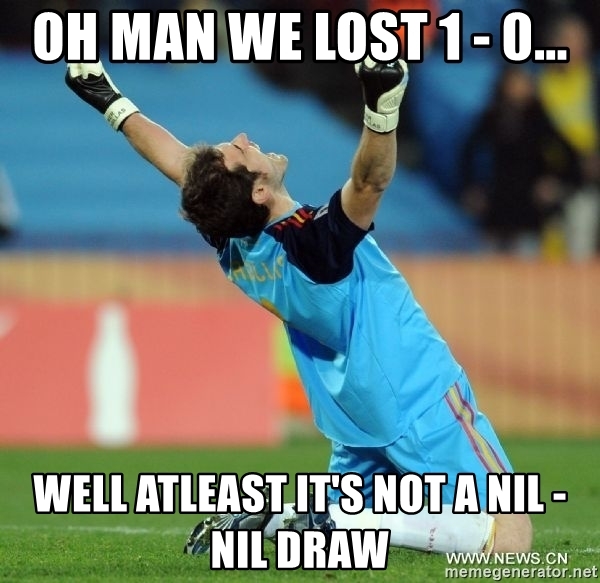 * Fun fact. Before the 1980s standings were based on two points for a win, one point for a draw. Even using that standard, the result is the same – Man City wins the title by a point, 68-67.

One thought on “Draws Suck”