Several years ago, the American Bar Association Journal put together a list of the “best lawyer movies.” They’ve recently updated it, to their credit (there’s nothing quite so sad as an out of date “best of” list), and it’s full of great movies – Primal Fear, A Few Good Men, To Kill a Mockingbird, etc.. I come not to scorn that list, but to supplement it, with five of my favorite overlooked lawyer movies.

A word on what “lawyer movie” means (to me, at least). It’s a movie where a lawyer is a main, if not the main, character and where the practice of law is important to the plot. It doesn’t have to revolve around a courtroom (although that helps) and, taking a cue from the ABA’s inclusion of A Man for All Seasons, isn’t limited to American lawyers. So, with that said, off we go.

Breaker Morant gets bonus points for not only being a great lawyer movie, but a great war movie, too. Set during the Boer War of 1899-1902, it’s the story of three Australian soldiers (although the titular Breaker is of English extraction) put on trial for murder of enemy prisoners and a German missionary. They’re attorney, another Australian, has only every handled land conveyancing before. It is, ironically, a real kangaroo court, with the soldiers being scarified more for the sake of international PR than justice.

That’s because, the movie asks, what is justice in a war where there are no rules? It’s from the Boers that we get the word “commando.” By the time the movie is set they’re fighting a rearguard irregular action that eschewed pitched battles, uniforms and the like. The by-the-book military law ways of dealing with prisoners didn’t really fit with that kind of war. But is the British Empire more interested in enforcing the rule of law or using the Australians as scapegoats? The irony is the murder of the German missionary, of which we knew they are completely guilty, is the one count on which they’re acquitted.

It also contains what might be my favorite last line in all of cinema: 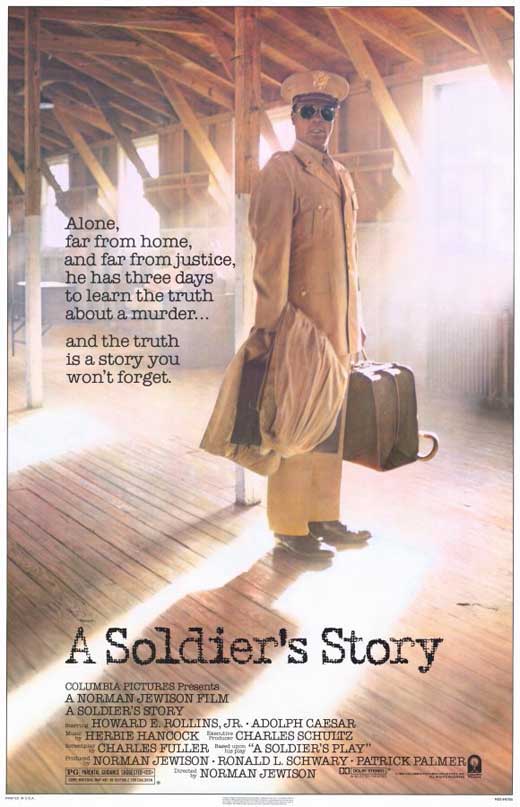 Another one that doubles as a great war movie as well as lawyer movie. Only this time the war is World War II and it’s nowhere near the events of the film itself. Based on a Pulitzer Prize winning play, it’s the story of an African-American army officer sent to a Mississippi base to investigate the death of an African-American drill sergeant.

Through the investigation we learn about the sergeant’s unit, a group of African-Americans desperate to do their part to defeat Hitler, but who have been reduced to a semi-barnstorming baseball team (they might get to play the Yankees). There’s an exploration of racism (the fact that the investigating officer is black is just too much for some folks) and abuse of power that spirals into a genuinely satisfying twist. Plus, there’s a hell of a cast, led by Harold Rollins and Adolph Caesar, but also including Robert Townsend, David Allen Grier, and a young Denzel Washington. 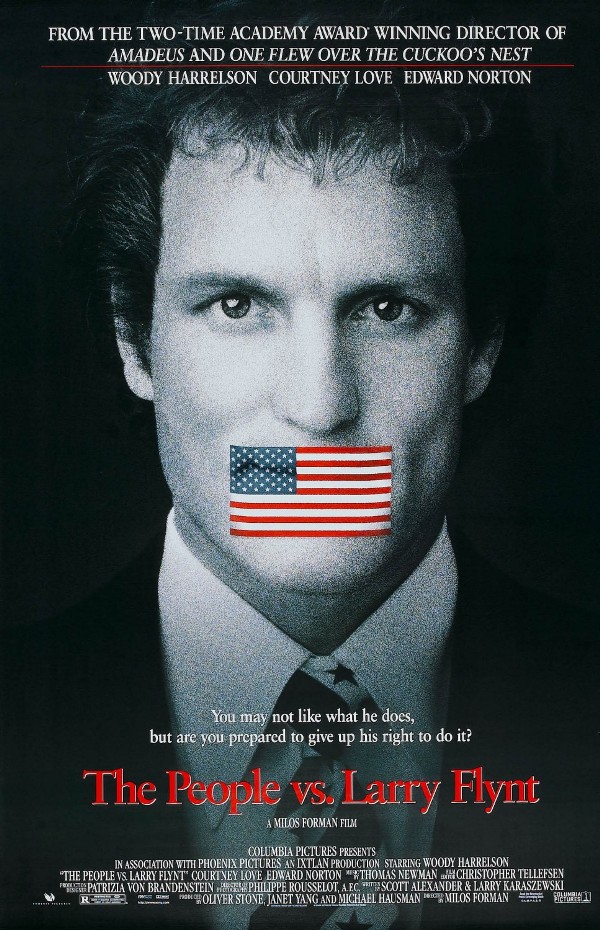 You don’t want to quit me, I’m your dream client: I’m the most fun, I’m rich, and I’m always in trouble.

Every lawyer has difficult clients, something that the movies aren’t always good at putting up on screen (to see a great portrayal of what it’s like to work with a fraud client watch Shattered Glass). Sadly, most of our difficult clients aren’t as fun or rich as Larry Flynt, though some of them are in trouble even more often than “always.”

The People . . . (directed by the late great Milos Foreman) is a bio-pick, but it spends a lot of time in court, culminating with the most realistic depiction of a Supreme Court argument I’ve ever seen on screen. It’s the culmination of Flynt’s fight against (the late and decidedly not great) Jerry Falwell, who sued Flynt and Hustler over a parody ad that implied Falwell had sex with his mother. For that alone, it makes the list. 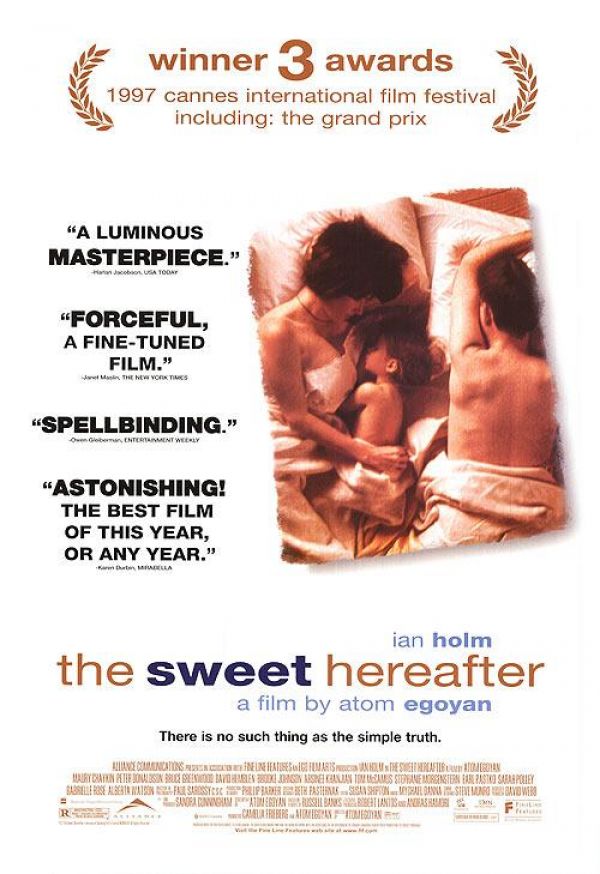 Every other movie on my list (and many on the ABA list) has great courtroom scenes. The Sweet Hereafter never gets anywhere near a courtroom, yet it still provides one of the best portraits of what it means to be a lawyer I’ve ever seen.

Mitchell Stephens (played by Ian Holm) is a big city lawyer with a drug-addicted daughter trying to build a case in a small, isolated Canadian town. A school bus has crashed through the ice, killing many of the town’s children and leaving deep scars on just about everyone. Stephens trudges from home to home, trying to sign up plaintiffs for a suit against the bus manufacturer and the school district. Thus, Stephens is literally an ambulance chaser, yet it’s clear he does believe in the righteousness of what he’s doing. He’s not just chasing a payday (though there is that). The melancholy of it all, being absorbed by the traumas of others, comes through in every scene with him. No other movie I’ve seen gets that aspect of what it means to be a lawyer.

Naturally, it all falls apart at the end (thanks to a surviving child, played by Sarah Polley, who’s gone on to direct some great films), which makes it the rare lawyer movie where the lawyer loses. Again, that’s a hard truth for most lawyers (most of my fellow criminal defense lawyers, at least).

One of the reasons I like to talk about “favorites” instead of “best” is that movies (and all art) strikes different people in different ways and sometimes you love something even if it isn’t a critical darling. I don’t think anybody would call Intolerable Cruelty one of the Cohen Brothers’ best movies, but it is undoubtedly one of my favorites.

That’s largely down to the fact that for the first year of my legal life I was a divorce lawyer. Working for legal aid as the domestic violence specialist I split my time between working with abuse victims to get protective orders and getting them out of marriages. The people I was working with didn’t have enough property (and, thankfully, not many had kids) to fight about most time, much less enough to worry about something like the famous prenup that bears the name of Myles Massey (played with all his old-school movie star charm by George Clooney), but the beats and rhythms of what divorces cases are like are the same regardless of what’s involved. Maybe it’s millions of dollars; maybe it’s the commemorative Smurf glasses from Arby’s. I recognized that on the screen.

Plus, there’s an easy screwball feel to the whole thing (Catherine Zeta-Jones, as the woman who cooks up the scheme to bring Massey to heal, is great, too), with just enough bizarre touches (Massey’s wheezing senior partner, the Baron, etc.), that it’s just fun. Which is something you shouldn’t be able to say about a movie with a divorce lawyer as the main character!