For its first couple of seasons, Homeland was among the best TV on the planet. Tense and twisty as any good thriller, it had the overlay of asking interesting questions about what drives people (in this case the lily-white costar) to terrorism? Things have slipped considerably since then, but it’s still an entertaining, and occasionally thrilling, show.

The further it’s gone, however, the further Homeland has moved into its own alternate universe. That’s only natural – any fiction is building its own world, after all. But after six plus seasons, Homeland’s America doesn’t look quite like ours does, and not just because President Trump was too wild a plot twist for a show like that.

In its current season, Homeland is charting the fall out of a presidential election that ended with an attempted assassination. One of the newer characters, O’Keefe, is an Alex Jones style radio/internet personality who starts the season on the run from the new president’s henchpersons. He hides out with numerous sympathizers and broadcasts screeds of resistance.

Which brings us to West Virginia.

In the second episode of this season O’Keefe makes his way to a farm in a rural area that becomes his final safe house. When the family who lives there (and some of their neighbors) welcome him, it’s with a story about a site nearby where the first battle of the Civil War was fought. It’s made clear that the site is Philippi, which places the action in West Virginia.

At the risk of sounding like Grandpa Simpson, I am not making this up. See this write up of the fourth episode:

With the FBI surrounding his West Virginia hideout, O’Keefe and his loyal listeners settle in for a long siege with power generators, jugs of water — and lots and lots of guns.

Or this article from a Virginia newspaper about the actual location where those scenes were shot:

Landon Graham said he was approached in September 2017 about using his rural property to serve as the location for the hideout, which in the show is supposed to be somewhere in West Virginia.

‘They wanted something that looked like West Virginia because that is where the scene was supposed to be. But getting to West Virginia is a nightmare so it’s better to be near Richmond,’ he said.

And still, in this week’s episode, which takes place in the aftermath of a deadly raid on at the safe house, O’Keefe is taken into custody and taken to . . . Richmond, Virginia. This shift of location is odd for a couple of reasons.

First, assuming O’Keefe is being charged with a federal crime (which he surely is), he’d need to be taken to a court in the district in which he was arrested – that being the Northern District of West Virginia (I chuckled imagining my colleagues dealing with the guy). Clarksburg is surely closer to the fictional Lucasville than Richmond, which is in the wrong district, anyway.

Second, there’s later a memorial service organized for those who died in the shootout, which is also organized in Richmond. Again, why have such an event several hours away from where the event occurred? It would be like having a memorial for the Parkland shooting students in Georgia. It took place in a church, not a huge stadium or something. Let me assure you, there’s no shortage of churches in north central West Virginia.

So what’s up? Is this just sloppy storytelling on the part of Homeland? Did they suddenly forget that West Virginia is, in fact, its own state and has been for 155 years? Surely the writers of a critically praised, major network TV series wouldn’t so cavalierly wipe an entire state off the map by sheer negligence.

No, I’ll give them the benefit of the doubt. Instead, I’ll choose to believe that in the land of Homeland, West Virginia never actually existed. All those references earlier this season were really to “west Virginia.” Yeah, yeah, that’s it! It has to be. What other explanation is there? They’re playing with the very fabric of existence, people! Millhouse was right! 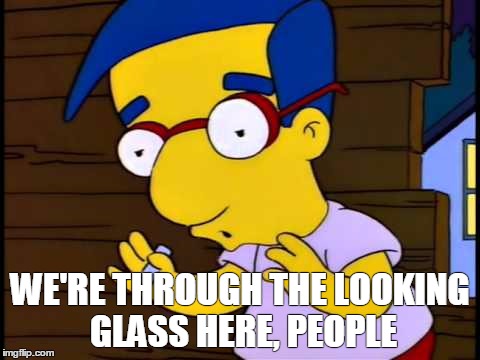