I’m currently reading Authors In Court: Scenes from the Theater of Copyright, which uses a handful of case studies to track the development of copyright law since its introduction in England via the Statute of Anne in 1710. I haven’t even gotten through the first case yet and already I’m entertained. To anyone who thinks folks way back when were more civilized than modern, crass, digital folks, think again.

That first case involves Alexander Pope, English author (and second most quoted writer in The Oxford Dictionary of Quotations, according to Wikipedia – behind only Shakespeare), and a contemporary publisher named Edmund Curll. They’re in the book because, eventually, Pope sued Curll for publishing some of his letters in which, Pope argued, he retained the copyright. But things got ugly long before that.

Curll and Pope were very different people. Pope was a country gentleman, an elite. He was a writer, but he didn’t do it for a living (heaven forefend!). Curll, by contrast, was a scrappy businessman, doing anything he could to make a buck. He developed a reputation as a low-rent publisher, becoming (among other things) the first publisher in England to be convicted of obscenity.

What set the feud alight was a book Curll published called Court Poems, which purported to contain works by Pope (among others). The poems were scandalous and Pope was upset, either because he or a friend was designated as the author of some of them. Rather than just send a nasty letter, Pope got even in a much more emphatic way:

shortly after the book appeared, Pop contrived to encounter Curll at a tavern in Fleet Street. There, under the pretense of sharing a glass of wine as a sign of reconciliation, Pope dosed Curll’s drink.

Said dose was an “emetic,” a word which sent me scrambling to the dictionary. Long story short – it’s something that makes you puke.

Poisoning a professional rival so that he puked is a pretty dick move. But Pope wasn’t done:

A few days later, adding insult to injury, Pope published a comic pamphlet couched in the sensationalist style of a Grub Street production, a style not entirely different from that of, say, a modern supermarket tabloid. Titled A Full and True Account of a Horrid and Barbarous Revenge by Poison on the Body of Mr. Edmund Curll, Bookseller, Pope’s undated pamphlet, identified only as “by an Eye Witness,” reports on the tavern episode and then veers off into malicious fantasy as the stricken Curll, convinced that he is dying, makes his last will and testament.

In the end he is spared from death by “a plentiful foetid Stool.” Pope still wasn’t done, writing two more pamphlets expanding the fantasy and, eventually , devolving into anti-Semitism.

Future chapters involve Harriet Beecher-Stowe and J.D. Salinger, among others. I wonder if they taunted their rivals with bodily fluids (and tales thereof), too?

They might, given that the Pope/Curll feud is just one of many in literary history that went beyond simple sniping at each other. For example, Gore Vidal once compared Norman Mailer to Charles Manson – so Mailer punched him at a party (leading to Vidal’s retort – “once again, words fail Norman Mailer). Hell, Mario Vargas Llosa punched Gabriel Garcia Marquez in 1976 and neither ever explained why (although this article suggests it was over a woman and, therefore, isn’t really a literary feud at all) .

Of course, writers being writers they’re more likely to lash out at each other with words rather than fists. Playwright Lillian Hellman sued critic Mary McCarthy after McCarthy said that “every word she writes is a lie, including ‘and’ and ‘the.’” Hellman got the last laugh, dying before the suit could be heard. Salman Rushdie responded to John Updike making fun of a name he used in one of his books by suggesting that Updike “stay in his parochial neighbourhood and write about wife-swapping, because it’s what he can do.” Finally, after Colson Whitehead gave a book by Richard Ford a particularly nasty review in the New York Times, Ford spit on Whitehead at a party. Whitehead shot back that this “wasn’t the first time some old coot had drooled on me” and that other critical reviewers (there were a bunch, apparently) best “get a rain poncho, in case of inclement Ford.”

If nothing else, feuds tend to be good for business. Pope and Curll, certainly, made hay out of their beef. Maybe what I need to do is go honk off some famous author and start a heated back and forth! Yeah, that’s the ticket! 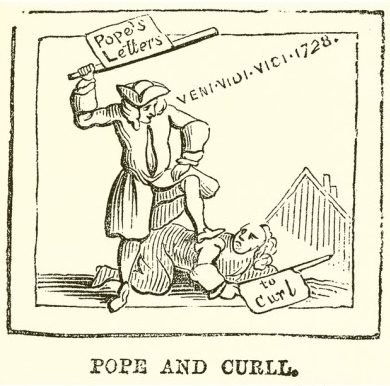