Creativity is a weird thing. A book is a book or a song is a song, but different writers can get to that finished product in lots of different ways. That’s made clear to me whenever writers talk about being pantsers instead of plotters. Pantsers, generally speaking, make it all up as they go along, without any great amount of planning, notes, and the like. Plotters, by contrast, do all that stuff before they start writing. I’ve learned, the hard way, than I’m more plotter than pantser. I admire pantsers for the way they write, but to me it’s as foreign an experience as it would be if I tried to write the last part of the Unari Empire trilogy in Tagalog.

Philip Pullman, author of the His Dark Materials trilogy, reports negotiating a deal with his character Mrs. Coulter to get her to spend time in a cave in one of his books. Some authors have reported that their characters give them unsolicited advice about the writer’s own life!

I just don’t get this. One of the amazing things about writing fiction is that I, as the author, am God, in a big G omniscient and omnipotent sense. Characters only exist because I create them and they only do what I tell them to. Their words are my words. Does it means they always develop the way I first intend them to? No, but that’s me changing my mind, not them rebelling.

Maybe I look at it this way because I started writing seriously as a lawyer and in legal writing you’re at the whim of so many other things – the law, the facts, your clients. In fact, it’s my clients who behave the way some writers talk about their characters – with complete free will and a dazzling inability to control themselves.

I always figure that when writers talked about characters talking to them or doing things against the writer’s will it was a way for writers to deal with the vagaries of the creative act, with a heaping helping of metaphor baked in (we’re talking about writers, after all). But I’m apparently wrong and in the minority on this, according to recent research with authors from the Edinburgh book festival:

Researchers at Durham University teamed up with the Guardian and the Edinburgh international book festival to survey 181 authors appearing at the 2014 and 2018 festivals. Sixty-three per cent said they heard their characters speak while writing, with 61% reporting characters were capable of acting independently.

‘I hear them in my mind. They have distinct voice patterns and tones, and I can make them carry on conversations with each other in which I can always tell who is ‘talking’,’ said one anonymous writer. ‘They sometimes tell me that what I have in mind for them isn’t right – that they would never behave or speak that way. I don’t usually answer back,’ said another.

Beyond that, 15% of writers surveyed say even talked back to their characters. So, what, are they crazy? Not so much:

Even though some authors reported that their characters had a life of their own, the researchers were keen to stress that there was no question of writers confusing fiction with reality. When the academics rated the writers on how prone they were to hallucinations, they did not score differently to other samples of the population. ‘Hearing voices and other unusual experiences are not in themselves a symptom of a mental health problem,’ they wrote. ‘This shows that vivid imaginative states – including losing control of one’s own imagination – [are] a healthy and safe thing which is important for how some people create fiction.’

Then what’s going on here? Researchers think that these writers aren’t sharing a singular experience, but it’s more that they’re describing a myriad of experiences that occur during the writing process. In other words, to say “they hear their characters talk to them” really flattens the nuance of the issue. 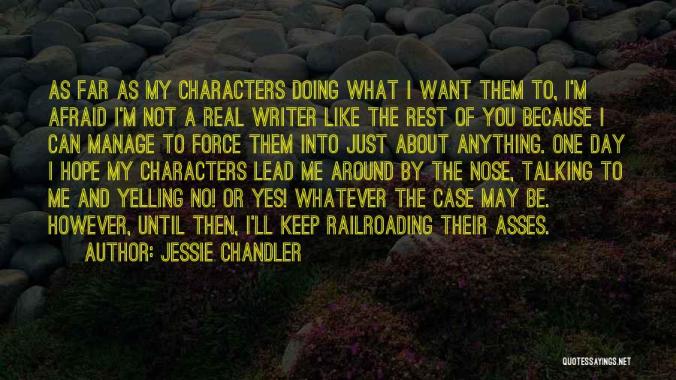 I get what he’s saying. There’s something transcendent and beyond the realm of grinding craft when characters talk to you. You’re not just writing, at that point, your communing with the muse, you’re tapping into the essential forces of the universe.

But I don’t think that can be right. Neither he nor I are missing out on anything – we just work differently. Truth is, while there may be a wrong way to write a book, there are probably an infinite number of “right” ways, because what works best for one writer might not work at all for others.

So, I guess I’m fine with the idea that my characters don’t talk to me. In place of the psychic connection that others have with their creations, I’ll happily sit back and make mine do whatever the hell I want while theirs are wreaking havoc!

One thought on “My Characters Don’t Speak to Me”