I am, as The Decemberists say, “a writer, writer of fictions,” but does that make me a lying sack of shit? I don’t think so, but I hope I never have to find out in court, at least in Alabama.

William McKinney choked his girlfriend and then stabbed to death her mother’s boyfriend. At his trial he claimed he was acting in self defense (to the stabbing, at least). He was also a writer (unpublished, apparently). Thus, when he was testifying in his own defense, he was asked:

Defense counsel objected to the relevance of all this, but was overruled. The prosecutor continued:

Q. Did you consider yourself a writer? Writer of fiction?

A. Inside that book bag, I’m pretty sure my book was in it maybe.

Q. Okay. Now, so you were writing your own book, right?

Q. Okay. When did you write your book?

A. Back during my incarceration.

Q. And you had it — they were composition notebooks, right?

Q. That you had written chapters in; chapter one, chapter two, chapter three? All that, right?

Q. In fact, that is bigger than the bag that’s State’s Exhibit 47. It was a very large book that you were writing, wasn’t it?

Q. And it was a work of fiction, I assume?

Q. So you at least considered yourself a writer?

Defense counsel objected to the relevance of all this, but was overruled. The prosecutor continued:

Q. Did you consider yourself a writer? Writer of fiction?

Q. You’re not a writer of fiction?

A. I wouldn’t call myself a writer, no, sir.

Q. But this book of yours is a work of fiction. But everything you’re testifying here — now, you’re telling us the truth today, aren’t you?

Q. You know you’re under oath and you’re looking at these folks and you’re going to tell them what happened that day, right?

In other words, “since you can make something up in one context, why should we believe you in any other situation?” That logic is dubious, at best. But it was good enough, at least for the court of appeals:

McKinney is not entitled to relief on this issue. As the State notes, ‘[t]he obvious inference the prosecutor was trying to draw was that, if McKinney writes novels or other fiction, then his account of the murder of Mr. Jackson [was] also fiction …. Whether McKinney was telling the truth was very relevant and a proper subject for cross-examination.’ (State’s brief, pp. 24-25.) See generally Wiggins v. State, 193 So. 3d 765, 805 (Ala. Crim. App. 2014) (“‘Counsel is given wide latitude and has the right and duty to cross-examine vigorously a defendant who takes the stand in his own defense. “A [prosecutor] may ask a defendant … questions tending to discredit [his] testimony, no matter how disparaging the question may be.”‘ State v. Rush, 340 N.C. 174, 186, 456 S.E.2d 819, 826 (1995).”).

I tend to agree with Eugene Volokh that:

To be sure, it’s perfectly plausible that McKinney was lying, just as it’s plausible that anyone else is lying; but I don’t think that would-be novelists are any more likely to lie on the stand than anyone else, or even any better at lying (unless perhaps they are novelists of proven and substantial gifts).

But I’d go further – even a writer of “proven and substantial gifts” knows the difference between truth and fiction. George RR Martin can spin him some tales, but I don’t think that means he’s lying if he testifies that the light at the intersection was really green. I do tend to agree with Volokh, however, that this was a “wet noodle of an argument” that wasn’t really prejudicial to McKinney. Still, it was irrelevant and the prosecutor was certainly trying to be prejudicial. Intent should count for something.

All in all, I think I’m insulted. I mean, I thought I’d sunk about a low as I could go, in terms of societal approval, by being a public defender. I had no idea that my scarlet letter, warning the wary of my wickedness, would be a W! 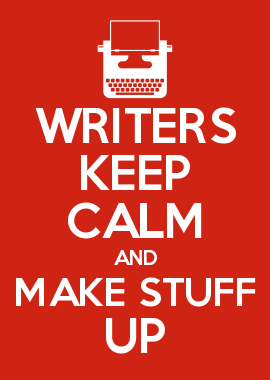