Recently there was a small kerfuffle in parts of the atheist blogosphere over, of all things, the guilt of innocence of Jerry Sandusky. Sandusky, you’ll recall, is the long-time assistant to legendary Penn State football coach Joe Paterno who was convicted on dozens of counts of child sexual abuse related to his position there. I’m less interested in the specifics of this case than I am about one particular argument made that raises an interesting question about the criminal justice system.

Things kicked off with a review in Skeptic magazine of a book, The Most Hated Man in America: Jerry Sandusky and the Rush to Judgment, which argues that Sandusky’s trial was tainted by recovered memory therapies and led to a wrongful conviction. The book’s got favorable blurbs from memory expert Elizabeth Loftus and false confessions expert Richard Leo, two names that make my defense lawyer ears prick up. The review was then favorably discussed by some of the atheist heavyweights, including Jerry Coyne and Daniel Dennett.

Others in the atheist blogopshere pushed back, wondering how skeptics could defend Sandusky. While some offered take downs of the review itself, others simply argued that the issue was settled because of Sandusky’s convictions. The leading proponent of that position was PZ Myers who wrote (links removed):

They’ve published a defense of Jerry Sandusky! Look, Jerry Sandusky was found guilty of 45 counts of child sexual abuse. He’s a convicted pedophile. The prosecution brought in a long train of witnesses and evidence of criminal behavior spanning at least 15 years and 10 victims, and this case found him guilty in a community that was full of fanatical Paterno/Sandusky defenders. Anyone remember the riots and protests when the Paterno empire fell? You can’t have a witch hunt when the targets are regarded as holy saints — the evidence was just so overwhelming and undeniable that even angels by repute could be defrocked at last.

Myers may be right about the weight of the evidence, but what I’m more interested in is the idea that because Sandusky was convicted at trial that it’s somehow wrong to examine the evidence against him. After all, the jury has spoken, right?

Except we know that juries get it wrong. Not all the time, certainly (and an overwhelming number of cases never get to a jury anyway), but enough for it to be a concern:

In the past quarter-century, the work of dogged attorneys and advances in forensic science have exonerated more than 2,150 men and women, 161 of those from death row. The Innocence Project, a New York–based nonprofit founded by Barry Scheck and Peter Neufeld in 1992, has freed more than 200 people and spurred the creation of numerous smaller organizations around the country devoted to the same mission. (From 2012–2015, I was the director of the Loyola Law School Project for the Innocent in Los Angeles.) By some estimates there are tens of thousands more wrongfully convicted prisoners languishing behind bars.

Given that, what kind of deference should the public give to guilty jury verdicts?

A quick aside on non guilty verdicts. It’s hard to read anything at all into those, since there are so many reasons why such a verdict could be returned. Maybe the prosecution completely failed to prove its case, or maybe it couldn’t meet the final hurdle to of reasonable doubt. Or maybe the jury nullified in light of sufficient evidence. With a not guilty verdict it’s hard to say much beyond “that guy hasn’t been convicted of anything.”

Back to guilty verdicts – what kind of weight should the general public give them? I may lose some of my defense attorney cred for this, but I’m going to say a lot. The law likes to use lots of “rebuttable presumptions,” things that are taken as true, but can, with sufficient evidence, be shown to be false. For example, in Federal court if you’re arrested on just about any drug offense there’s a presumption that you should be held without bond. You can argue your way out, but it relieves the Government of the need to argue your way in.

I’d grant guilty verdicts that kind of presumption because it’s the one time when a group of people are given one job only – evaluate the evidence presented and, using the filter of the judge’s instructions, determine whether the defendant did it or not (whatever “it” is). Everybody else in the courtroom – the lawyers, the judge, the spectators, the press – all have other things competing for their time and attention. Only the jurors have the clear job of listening to every word of testimony, looking at every exhibit, and deciding what it means.

It’s not a full proof system, for sure. The jurors only hear the evidence presented in court, so if the defendant has a shitty lawyer or a prosecutor who is pushing the boundaries it could present a skewed view of the case. In addition, the rules of evidence pare down the universe of facts that a jury can consider, leading to situations where the “well informed” are “those outside the courtroom.” And, finally, the case itself might be tangential to whatever the defendant is really accused of doing. That Al Capone was convicted of tax evasion does little to show, one way or the other, that he was a mob boss.

Which is why I think a rebuttable presumption is the way to go. It’s perfectly right to say because he was convicted of dozens of sexual abuse counts against children, Sandusky probably actually molested them. But it’s not an ironclad guarantee, as Myers and others seem to suggest. Those who would rebut the presumption, however, have a lot of heavy lifting to do. 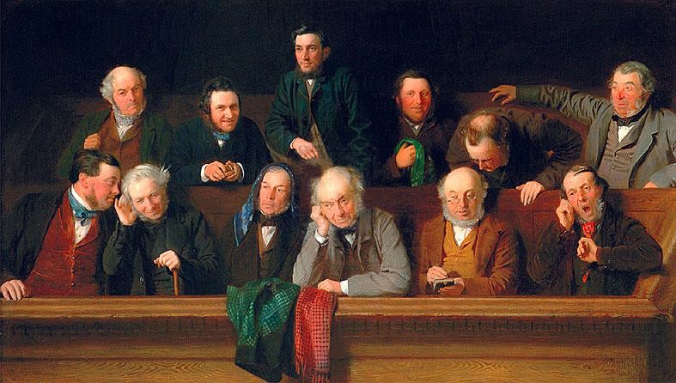 The Jury (1861) by John Morgan, via Wikimedia Commons