There’s no point in lying – I’m fond of profanity. I don’t trot it out all the time (I’ve managed to never let expletives fly in a legal brief, for instance), but I don’t lock it away as something evil, wicked, or never to be said. It creeps into my writing sometimes (much to the consternation of my mother-in-law – but she came around!).

More than anything else, I’ve always thought that deciding not to use certain words because they were “bad” is just silly. I take the position Henry Drummond, the William Jennings Bryant doppelganger in Inherit the Wind, does:

I don’t swear just for the hell of it. Language is a poor enough means of communication. I think we should use all the words we’ve got. Besides, there are damn few words that anybody understands.

But what really drives me nuts is the superiority that those who forgo cursing wield over the rest of us, particularly the argument that cursing is a sign of a limited vocabulary. The implication, of course, is that we’re just simple minded beasts, not refined human beings.

This is the takeaway from a study recently published in the journal Language Sciences, which finds that fluency in ‘taboo words’ is correlated with having a larger vocabulary in general.

As the article points out, this goes against common sense (which, in my experience, is mostly wrong anyway) and some prior research, but it seems solid:

These findings suggest the idea that ‘fluency is fluency,’ as the researchers write. People who could recall a lot of bad words also tended to be more eloquent in general. In other words, swearing is not necessarily a sign that a person has a limited vocabulary or can’t think of anything better to say.

Some other interesting findings include that the amount of cursing isn’t linked to how religious people are and that the foul-mouthed tend to be more neurotic and less agreeable, but also more open to new experiences. In other words:

swearing is mostly a vehicle for expressing strong emotion – anger, frustration, derogation, surprise and elation — among people who care less about who they might offend. Cursing is an intense, succinct and powerful way of expressing yourself, even if some people find it unpleasant.

Fuckin’ A. Couldn’t have said it better myself. 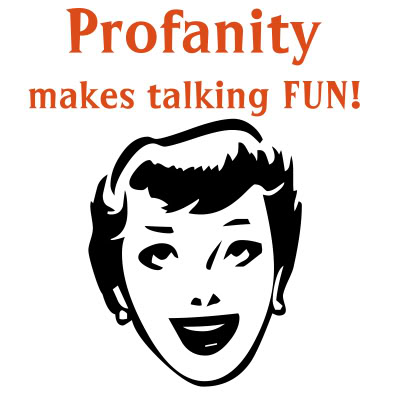