After a long holiday weekend seems like as good a time as any to bring readers up to speed one what I’ve been up to.

This past weekend I had my first chance to get out and meet the public as an author: 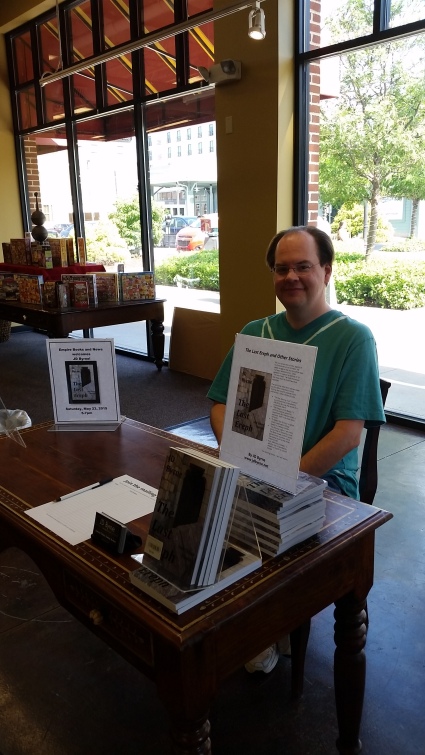 Big thanks to Empire Books & News for having me and to all the folks who stopped by. It’s a bit of a surreal experience, like sitting in a fish bowl watching the world go past, but also kind of fun.

I’ll be back out in world next month for the West Virginia Writer’s showcase at Tamarack in Beckley. That will include a reading, which should be different. I haven’t stood up and read something to crowd since, what, high school? Still haven’t figured out what to read, either. More details forthcoming or, as always, check the appearances link for that info.

“The Destiny Engine,” is now complete and is currently trying to find a home. It’s a steampunk-style reworking of a Grimm fairy tale, “The Aged Mother.” Once its finds its niche I’ll let you know where to find it.

Moore Hollow, a novel set in West Virginia about disgraced journalists, crooked politicians, and zombies (maybe), is still set for release this fall. I’m working on finding an editor right now, after which I can move on to getting a cover.

But right now, my main focus is on finishing the second draft of The Endless Hills, part two of a fantasy trilogy that will be out next year. For me, a second draft of a long work is a complete rewrite. Essentially, I imported a process I use sometimes at work when multiple attorneys contribute to a brief and everything has to be synthesized to make it read with a single coherent voice.

In the case of the novel, I take the first draft and retype it, paying more attention to the line-by-line details. A first draft, for me, is about getting the who did what to whom, where, and why down on the page. The second draft is where I can focus more on details and making sure the whole thing works as a coherent story. After that come more drafts produced by laborious close reading while wielding a red pen.

I’m about a sixth of the way through the first draft now, so there’s still much work to be done in The Endless Hills.