Billy Lynn is a soldier, 19 years old, and, thanks to an embedded Fox News camera crew, a big damn hero (to borrow a phrase). His long halftime walk isn’t his participation in a Thanksgiving Day football halftime show (starring Destiny’s Child), but rather the respite from the Iraq War that he and his squad, the Bravos, enjoy as a result of their celebrity. But
like all halftimes, it has to come to an end.

Although the action of Billy Lynn’s Halftime Walk takes place entirely on the day of said game (at old Texas Stadium – it’s a period piece, after all), its scope is a whole lot more ambitious. By dropping Billy and his mates in the middle of a charged up exhibition of pure Americana, Ben Fountain uses it to comment not just on the United States as a whole, but particularly on how the nation has interacted with the wars of the Bush administration. Or, more precisely, how we didn’t (and continue not to, really).

Everywhere he goes, Billy is confronted by people from all walks of life who want him to know how much they think of him and the work he’s doing. The platitudes have become so routine and meaningless they’re rendered in a kind of shower of buzz words devoid of any real meaning or context. It’s a brilliant device. More simply, the disconnect between the kind words and the lack of understanding is best symbolized by Billy’s simple quest for an aspirin – when confronted with the easy task of treating a headache, the home front fails miserably.

In fact, one of the failings of the book is that the people Billy interacts with are so monolithic in how they treat him that they lose any kind of individual identity. Aside from his sister, who begs him to go AWOL rather than return to Iraq, nobody at home has any real interest in what’s going on in Billy’s head. There is no conversation, for instance, with a veteran from Vietnam or what not who might better understand what Billy has gone through.

Which is disappointing, because not a whole lot happens during the day the book chronicles. Since the people Billy meets are all pretty much the same, the interactions become increasingly dull as Fountain’s main point gets beaten in again and again. Throughout there’s a tease of a film deal for the Bravos’ story, which is amusing enough (the best chance to have it made is to have Hillary Swank portray Billy), but is ultimately unresolved.

One of the interesting aspects of the book is how many real world people and places are referenced. That makes it all the more jarring when Billy and crew meet the owner of the Dallas Cowboys, who although he is clearly meant to be Jerry Jones cannot actually be Jerry Jones (for obvious reasons). It throws you off, as a reader, but you do get over it.

In the end, Billy Lynn’s Long Halftime Walk scores some points about modern American and our disconnect from the wars fought in our name (I came across it thanks to this article in The Atlantic, for example) and its dark undercurrent of humor makes it a quick read. But lacks the weight it might otherwise have carried. 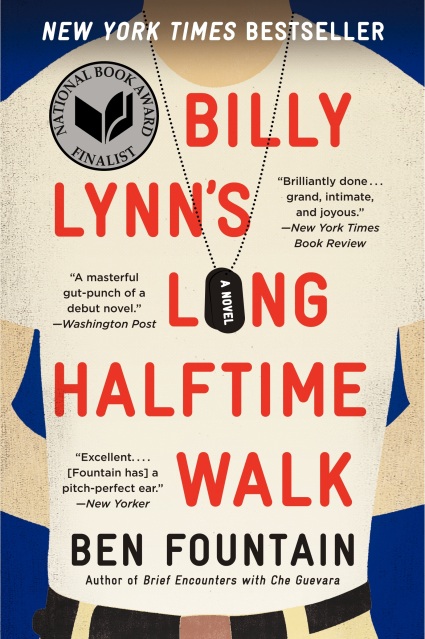