If one knew nothing about progressive rock – “prog,” as it’s usually called these days – one could do worse than the new book by (of all people) political reporter Dave Weigel. Weigel is clearly a fan and that helps an awful lot with a book that is otherwise fairly shallow and doesn’t provide a great deal of insight into what makes prog (or prog fans) tick.

What Weigel provides is a brisk trip through prog’s history, starting with its roots in 1960s psychedelia. Actually, he goes back even further, to Franz Liszt and the superstar he was (some of the fan behavior from those days wouldn’t be out of place if it happened today). In a fun bit of synergy, Yes keyboardist Rick Wakeman would later provide the soundtrack for the bonkers Ken Russell film (is there any other kind?) Lisztomania (Liszt himself was played by Roger Daltrey, because why not?). This is good background and I’m glad Weigel devoted a chapter to it.

Most of the book focuses on prog’s commercial heyday, from about 1969 to 1974 – roughly the time during which King Crimson (in its many permutations) were around. Crim, and particularly Robert Fripp, is one of the touchstones to which Weigel returns again and again, along with David Allen of Gong and a few others. This starts out well enough, as a way to track the commercial and artistic development of the genre using specific examples, but things get awfully spread out by the late 1970s. By that point, as Weigel tries to keep track of the careers of everybody who passed through Crim or Yes the book becomes a collection of quick anecdotes that don’t really tie together. It might have worked better to tell the story of the genre through one person deeply embedded in it (Bill Bruford – with connections to Crim, Yes, Genesis, National Health and so many others – would be a good choice).

Prog is usually thought of as a distinctly English thing, and it’s true that most of the genre’s heavyweights come from (or are at least closely associated with) the UK. However there was a vibrant scene around the world that deserves attention. To my pleasant surprise, Weigel examines this, albeit briefly, through some usual suspects (Rush, Kansas) and some more esoteric ones (Italian bands like Premiata Forenria Marconi). Still, there are odd gaps, including the complete absence of discussion of Frank Zappa, aside from his influence on early proggers like Soft Machine.

I was also pleasantly surprised that Weigel continued the prog story past the 1970s. He quickly discusses Marillion and the rise of neo-prog in the 1980s as well as Dream Theater and the development of prog-metal in the 1990s. It’s not a deep dive, so he doesn’t capture the real breadth of the modern prog scene, but he at least recognizes that it’s here. The book is subtitled “The Rise and Fall of Prog Rock,” which may rankle fans, but it’s the truth – the genre boomed for a few years in the 1970s then nosedived in terms of popularity. That it’s still kicking at all today is kind of a miracle.

Given all the ground that Weigel covers, it’s a shame that he falls into the trap of spending too much time trying to describe the music. Zappa famously said that writing about music is like “dancing about architecture” – it’s damned near impossible. Weigel’s descriptions fall flat and, in some instances, don’t even match what he’s talking about. I don’t know what he’s thinking of when he’s talking about the first track on Yes’s Tales from Topographic Oceans, but it sure as hell isn’t “The Revealing Science of God (Dance of the Dawn).” The beginning of “Dance on a Volcano” gets attributed to the wrong guitar player and then he talks about synth chords being played when there are none about (Tony Banks didn’t go polyphonic with synths until Duke, I think).

There are some other Weigel just gets bizarrely wrong. He calls a nascent Keith Emerson project in the early 1980s the “rump of Yes” (presumably he was thinking of Chris Squire and Alan White’s foray with Jimmy Page?). In discussing what the King Crimson guys were up to before Fripp assembled the mighty “double trio” in the mid 1990s, he explains how Adrian Belew had toured the world with Peter Gabriel. That, of course, was Tony Levin (for all the people Belew’s played with I don’t think he’s every worked with Gabriel – something which needs to happen!). Along with the misdescribed music there’s enough here to wonder how much else Weigel gets wrong.

As usual, I didn’t actually read The Show That Never Ends, I listened to it via Audible. Normally even a less than stellar reader doesn’t get to me, but the reader for this book was particularly poor. For one thing, in some instances where Weigel is quoting someone, the reader tries to do accents. This is a bad move to begin with (he doesn’t sound anything like the actual people involved), but it’s compounded by not being consistent – sometimes he tries an accent, sometimes he doesn’t. For another, the reader has multiple issues pronouncing words. OK, so he doesn’t know a Moog synth from a toaster oven, but there’s plenty of video of and about Bob Moog where you can learn how to pronounce the man’s name! Given the amount of time Weigel devotes to Moog’s synths (mostly via Keith Emerson), that’s inexcusable. Then there’s things from song lyrics – “syrinx” (from Rush’s “2112”) and “Rael” (the main character in Genesis’s The Lamb Lies Down on Broadway) come to mind – that he gets wrong. And I won’t even begin to speculate on how “fugue” comes out “fuh-guh.” It’s just awful.

As I said, if you’re a prog neophyte there’s a lot to recommend in The Show That Never Ends. It’s a story told by someone with affection for the music, which isn’t always the case. But you’ll probably get deeper and more interesting reflections on the music by going someplace like Progressive Ears or Progarchives and poking around. Whatever you do, stay the hell away from the audiobook. 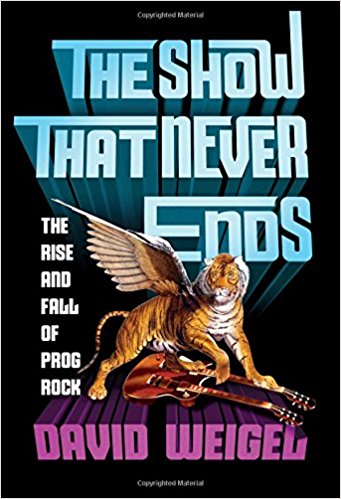