If there was a holy grail for Frank Zappa fans, it was this.

For several days in December 1973, Zappa and the Mothers as they existed at that time – a group some consider his best ever and included George Duke and Chester Thompson (the drummer one) – hit the stage at LA’s Roxy Theater for a set of shows where not only the sound but the pictures were all recorded. Thus Zappa’s explanation in the intro for “Penguin In Bondage” that he’s “circumlocuting” a particular topic “in order to get this text on television.” The shows served as the basis for Roxy and Elsewhere, a partly live album that many (including yours truly) consider Frank’s best.

But there was supposed to be a movie, too, filmic evidence of Zappa and crew at the height of the their powers. As it happens, it was doomed from the start:

Unbeknownst to anyone on the crew, the audio recording device suffered an internal malfunction within two minutes of the very first show. There was no way for anyone to know about it until the film had been shot, processed, and delivered to the editor. Since the production schedule was so short, they didn’t process any of the film until all of the shows were ‘in the can.’ When the editor went to align the picture and sound . . . it became apparent that the program stayed in sync for all of five seconds.

That’s from the liner notes from Roxy: The Movie, which has, for years, been just out of reach for Zappa fans. Now it’s has finally seen the light of day after being a tantalizing mirage for my entire lifetime. Is it worth the wait?

Yes and no. In all honesty, it would be impossible for the movie to live up to the expectations that decades have piled upon it.

For one thing, it’s not just a video document of Roxy and Elsewhere. If anything, it shows just how much of that album is studio work, versus live. That’s not a bad thing – Zappa never held closely to the distinction between “live” albums and “studio” albums (even his 1988 tour releases that preach about there being no overdubs have tracks cobbled together ex post from multiple sources). But it does lend the sense that something’s missing, that there’s a stripped down feeling to some of the material.

For another thing, Zappa being Zappa there are some things that just don’t work on the night and are much better elsewhere. Primarily that’s “Inca Roads,” which gets a low-energy lounge version here that pales beside the one recorded later in Helsinki (memorialized on You Can’t Do That On Stage Anymore, Volume 2). And the marvelous side-long suite from Roxy and Elsewhere feels truncated without “Village of the Sun” leading into the other two parts.

If that sounds awfully negative, it shouldn’t. This is still a great document of a Zappa concert with the man in his prime. He rules not just the stage but the entire venue, directing musicians and audience alike. You get to experience the entirety of “The Be-Bop Tango (Of the Old Jazzman’s Church)” in its entirety, complete with what can barely be referred to as “dancing.” And the other two parts of that side following “Village”? Brilliant. Napoleon Murphy Brock getting sexed up during “Dummy Up”? A little more disturbing!

Another thing that’s fascinating to watch is the multitude of percussion on display. The band for this gig had eight members (Frank included), of which three were full time bangers of things – Ruth Underwood, Chester Thompson, and Ralph Humphrey. Hell, Zappa even through in with the pounding at one point. What’s amazing is that by seeing who’s doing what, as opposed to just hearing the end product, you’re able to see how the parts play off one another and what they each bring to the table. So many times you see a band with two drummers and wonder what’s the point. Not so here.

So if you’re new to Zappa and coming to things with an open mind, that mind will be blown by Roxy: The Movie. It’s a document of man at the height of his powers, leading what’s considered to be one of his best collections of musicians, and having a hell of a good time to boot. That it can’t quite live up to what people like me had hoped it could be is on us, not Frank. 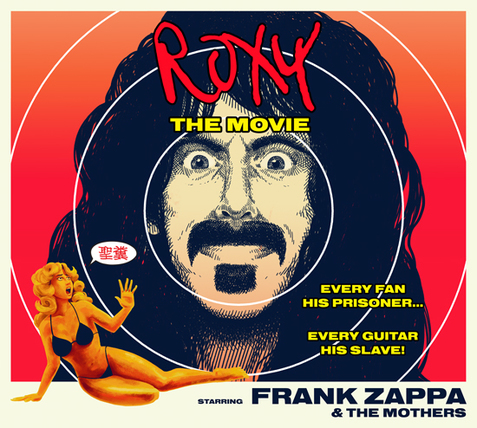