It’s hard to believe that, in an era when A Song of Ice and Fire and it’s TV variant, Game of Thrones, are such cultural icons that there was a time when George R.R. Martin was a failed novelist. Commercially speaking, at least. After a handful of short-story collections and novels (including the very good Dying of the Light), The Armageddon Rag was such a flop when it came out in 1983 that (in Martin’s words) it “essentially destroyed my career as a novelist at the time.” He went to work in television for the next several years before he returned to novels and began working on A Game of Thrones. Is The Armageddon Rag that bad? Should it have been commercial suicide? Those, of course, are very different questions.

Let’s take the second one first. It might not have been suicide, but The Armageddon Rag must have been a hard book to sell. It’s kind of a murder mystery, but it’s also a music soaked reflection on the lost dreams of the 1960s. Did I mention it involves raising the dead and a subtle kind of deep, dark blood magic? You can see the issue. It’s fantasy, but it doesn’t really have that feel, but it’s certainly not “realistic.” I can see why it sank, regardless of quality (which gives me pause, given my upcoming novel about zombies that really isn’t a zombie story – get me?).

Which is as shame, because it is pretty good.

As I said, it starts with a murder mystery, in which our hero, Sandy, starts to investigate the grisly, ritualistic murder of the former manager of a band called The Nazgul (yes, it’s a Tolkien reference – check out the graphic on the bass drum on the cover below). They were a fast-rising proto-prog/hard rock band that’s career was cut short when, near the finale of a massive outdoor concert in New Mexico, their lead singer was shot and killed.

Sandy kicks off his investigation a dozen years later. But what starts as a mystery quickly swerves into a reverie for the 60s and the dreams of that era. Sandy puts from east coast to west (in his trusty RX-7), talking with the remaining members of the band as well as a group of his college friends, each of whom represents some version of the shattered hippie dream. There’s the sellout working in advertising, the burned out college professor, etc. The most poignant is a guy who’s controlling father (an Tom Clancy-type author referred to as Butcher Byrne *gulp*) basically drives him crazy and locks him away in the family mansion.

None of this has much to do with what appears to be the point of the story, which is why Martin deserves so much credit for making this bit fly by. Sandy’s road trip was probably my favorite part of the book.

Once Sandy hits the west coast, things take a turn. Sandy meets a guy who is planning a comeback for the resurrected Nazgul, one that is about more than just an 80s guy’s attempt to cash in on 60s nostalgia. This is where the blood magic starts to creep in. Sandy is wrapped up in this, of course, and, when push comes to shove and the band is raging through the title track one more time on that New Mexico mesa the fate of the world lies in Sandy’s hands.

Pity it takes so long to get there.

The first half of the book, which could have seemed too long and too untethered to the main story, flew by. Getting to know Sandy’s old friends was interesting, as was their different attempts to deal with the loss of their dreams and stick to their principles. It also contains a fantastic dream sequence while Sandy’s in Chicago that turns the 1968 protests into a real horror show.

The second half, by contrast, drags on as Sandy becomes the PR guy for the reborn Nazgul tour. We know early on this will all culminate with another concert in New Mexico and something is obviously going on, but we get length reports of multiple rehearsals and concerts that don’t really push things along all that much. Making things more frustrating is that as we grow closer to the climax we don’t get a much better idea of precisely why all of this is happening. It’s hard to see what new manager’s end game is. Perhaps that’s why, when the end finally comes, it sort of drops like a lump.

Having said all that, it’s still a pretty fun read. Martin obviously cares a great deal for the late 60s/early 70s music scene that the Nazgul would have inhabited and that shows through. The details of the band’s history, down to a discography and lots of song lyrics, are impressive, too. And it’s interesting to think about how even if music can change the world, whether it should. 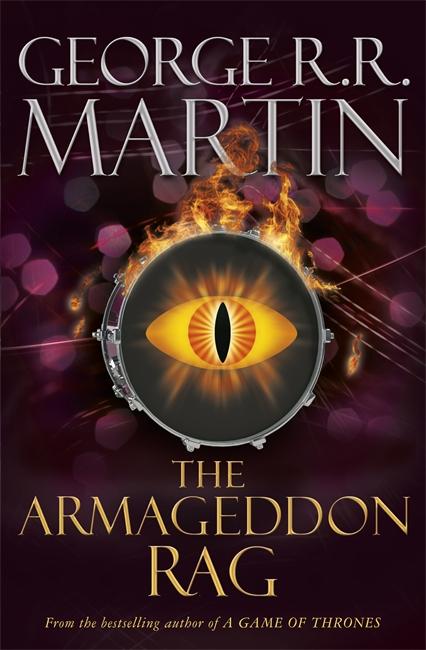